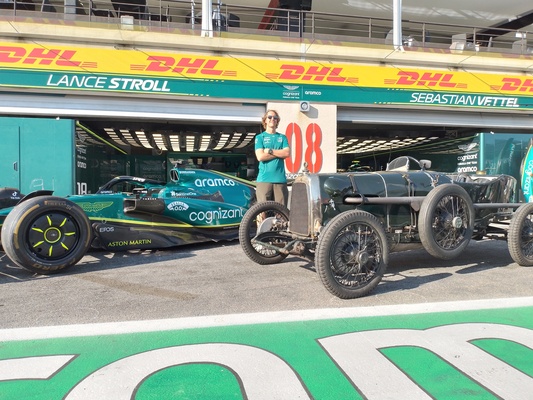 We were delighted to work with Aston Martin Lagonda and the Aston Martin Aramco Cognizant F1 team to celebrate the marque's 100th year of Grand Prix racing. As yet, this astonishing milestone cannot be claimed by any other manufacturer.

The celebrations took place at this year's French Grand Prix as it was on the street circuit at Strasbourg in 1922 that Aston Martin first ventured into GP racing with Count Louis Zborowski at the wheel.

In honour of the centenary, both 2022 F1 cars carried the circular AM button badge from 1913 on their nose cones in place of the usual Aston Martin wings. 1922 Grand Prix racer TT1, aka 'Green Pea', took pride of place next to Sebastian Vettel's AMR22 in the pits at Paul Ricard circuit. Dressed appropriately in 1920s attire, Vettel took Green Pea out for a celebratory track lap with Johnny Herbert as a passenger. Johnny was hatless, and both were grinning broadly on their return to the pits, a testament to the fun they'd had.

Green Pea has a 1.5-litre side valve engine that was originally intended for the 1922 Isle of Man TT. Weighing only 750kg it is 45kg lighter than the AMR22 car. The original two-seat configuration was essential as it required the travelling mechanic to pressurise the fuel system as they drove along and be responsible for running repairs. In 1922, it was usual for competitors to drive considerable distances to their events in their race car to compete before returning home in the same fashion. Technical issues were expected! Green Pea continues to race today and the current owner, Rob, continues the family stewardship from his father.

Ecurie Bertelli handled all the logistics and mechanical support before and during the weekend to enable Green Pea to enjoy its far-reaching and global attention at the French Grand Prix. We are proud to showcase these pre-war era cars' provenance and continued history.