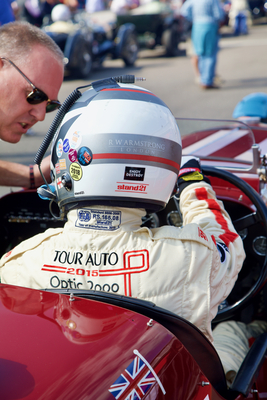 A wet start for Thursday's test day brought back foreboding memories of the wet and cold at the Silverstone Classic in 2021. As the sun showed itself in the afternoon, everyone felt their spirits lift as the Aston Martins were put through their paces.

Friday was quali day and all four Astons in the care of EB Racing recorded some very respectable lap times indeed. The team included Robert Blakemore & Nigel Armstrong in a Speed Model, Alan Middleton in Speed Model 'Red Dragon', Steve Skipworth & James Dean in the single-seater Monoposto, and Darren Turner & Jonathan Lupton in LM4. The four-strong support crew were on hand to sort out any last-minute adjustments and also ended up changing the differential on the Monoposto following driver feedback to better match the demands of the circuit. Red Dragon qualified just ahead of the Monoposto with the other two placed not far behind. Darren Turner, in the 1.5 litre LM4, put in some scorching times almost comparable with the 2-litres.

Race day dawned bright and still and the early birds of the EB Racing support crew enjoyed watching a group hot air balloons depart in the peaceful stillness before the business of the day.

Track grip levels had decreased but nonetheless, all four cars and drivers put in great performances. Robert Blakemore had an exciting battle with Edward Bradley in his Ulster and the pair exchanged places countless times. All finished strongly; Alan Middleton and Darren Turner both received trophies for second in their respective classes and the Monoposto awarded third in class. The Speed Model of Blakemore & Armstrong just missing out on silverware and finished fourth in class.