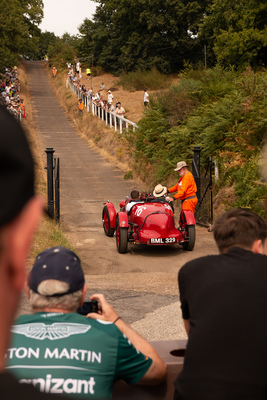 The resounding success of the Aston Martin Heritage Trust Heritage Festival in 2021 meant there just had to be another in 2022! This time Brooklands played host and again multitudes of Aston Martins from all eras gathered together in mutual appreciation of vehicles through the ages.

Ecurie Bertelli staff and friends gathered at early-o-clock and departed in a convoy of seven, plus two more in trailers. The two-hour journey itself was part of the fun, enjoying both picturesque roads and being part of a very special group of motors.

Ecurie Bertelli had a trade stand on which several of the current sale cars were on display, as well as a work in progress: a Side Valve with only its engine and sculpted timber body frame fitted to the otherwise bare chassis. Approximately fifty pre-war cars attended along with scores of post-war and modern vehicles. HWM Aston Martin assisted with the transport of the three Team Cars belonging to Nick Mason's family and brought them along to join the Team Car lineup. This venerable group included LM 1, 4, 7, 9, 15, 16, 17, 18, 19, 20 & 21. Also of interest were Razor Blade, the Halford Special, TT1 and TT2.

Some of the pre-war car owners took the opportunity to try the thrill of driving up the Brooklands test hill. The temperatures of the heatwave made it a little too hot at times but this did not diminish what was a thoroughly enjoyable day. Congratulations to the AMHT, the AMOC and in particular Tom Wood, Steve Waddingham and HWM Aston Martin.