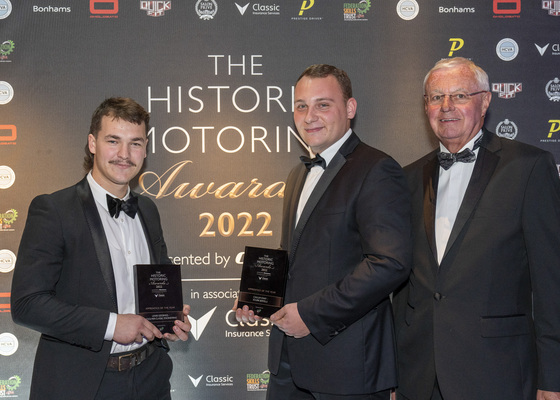 This year's Historic Motoring Awards, hosted by Octane Magazine, offered more award categories than ever to reflect the diversity of skills and interests of those who are wholly invested in the many facets of historic motoring. Ecurie Bertelli had a vested interest in three of these. Running as a finalist for Restorer of the Year, we knew that despite our successful conservation and restoration projects we were up against some stiff competition. For a second year, the double Octane-featured MkII barn find, '402', was contending for Car of the Year, having won a landslide victory in 2021. Finally, one of our own team, Callum Staff, was a worthy candidate for Apprentice of the Year.

Set in a top hotel in Leicester Square, the prestigious black tie dinner was packed with historic motoring's great and good. TV broadcaster, journalist and racing driver Amanda Stretton presented the awards. We even ran into Richard Hammond, although why he was there was a bit of a mystery but there is always added sparkle to these things when there's a celebrity or two in the mix.

Sadly, Restorer of the Year went elsewhere and 402 hadnt quite secured enough public vote for a second year running. We waited impatiently until nearly the end of the presentations to hear that our own apprentice engineer, Callum Staff, had been awarded Apprentice of the Year - sharing the crown with Lewis Giddings of Woolmer Classic Engineering. Callum is a worthy winner, not only being a rising star at Bicesters Heritage Skills Academy but also an active ambassador for the StarterMotor charity which passionately promotes young peoples involvement in the ownership, enjoyment and maintenance of classic vehicles. As part of his work with StarterMotor, Callum has twice taken part in the London to Brighton Veteran Car Run as well as sharing his enthusiasm at motor shows and the regular Bicester Sunday Scramble events. With over three years experience at Ecurie Bertelli weve seen him flourish; extending his knowledge and experience through dedicated hard work. He is now a core part of our technical support team at track and rally events, helping make everything run smoothly for our Aston-Martin drivers, whether racing at Le Mans Classic, at the Nuvolari rally around Italy, or at the countless UK race meetings we support. Well done Callum!