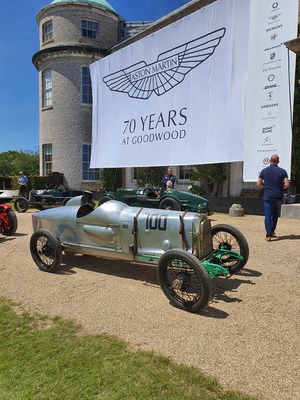 Aston Martin was the featured marque at the Goodwood Festival of Speed this weekend, where twice a day a wide range of Aston Martins climbed the hill next to Goodwood House. The Astons varied from modern builds to pre-war cars dating back to 1921.

Ecurie Bertelli had the opportunity to bring a pre-war vehicle along; Speed model 'Red Dragon' from 1936. It was in action this weekend, and previously won the same Hill climb at Goodwood in 1952.

Aston Martin brought several brand-new models to the mix this year including the company's first SUV (The DBX, with a powerful V8 engine,) the Vantage AMR, and the DBS Superlegerra Volente. Aston Martin also showed off its first pure-electric car, the Rapide E. In addition to these, cars which had competed in F1 races were on display with many other car makers bringing new never-seen-before models to the event.

Among the cars featured were these front the pre-war era-

This was a truly special event where Aston Martin could showcase cars spanning an astounding 97 years of design & development. What will the future hold?