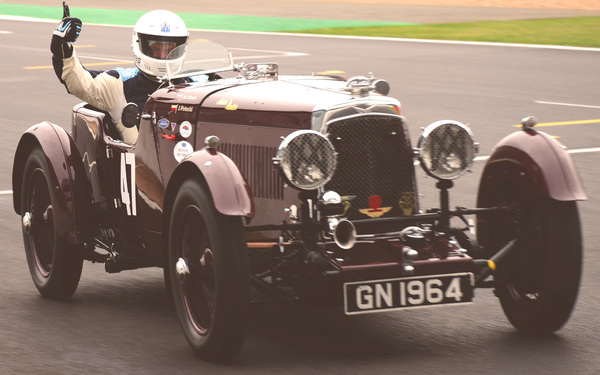 It was a mixed bag of weather this year, which seemed to affect the atmosphere somehow. Whilst the circuit was busy the crowds were definitely thinner this time, but nonetheless there was a good show of Aston Martins with 12 pre-war cars in all.

Two of our customers took advantage of the test day on Thursday to give their cars a shakedown. Then Friday - who can forget that record-breaking hot day - for qualifying. No problems for the cars, just discomfort for those in their fire-proof layers! With the grid positions then decided, we joined the very hospitable Middleton family in co-hosting the now-traditional BBQ for our drivers and support crew.

Then, in true British style, the weather over-compensated and the heavens opened for race day. Saturday's race was not until 6pm so the mood of our drivers evolved from relaxed, through to fidgety, then impatient! A quite different story for our hard-working support crew who were kept busy throughout the whole weekend with the usual range of gremlins to send packing. Still - they say they like it this way.

The grid was packed with Bentleys as it was their centenary year. These are a perennial challenge for the Astons as the Bentleys have the straight line power but the Astons are far more nimble in the corners. After much repeated overtaking and then losing the place it was time to pit for the driver change. For those who elected not to share, their penalty was a 15 second halt in the pits - an excruciatingly long time to just sit when you're just itching to get back out again. On resuming, there was delight to find that the particular competitor you'd been scrapping with was nowhere to be seen. Followed by an eye-roll as they emerged from the pits a lap later - in front - from their own pit stop.

When the chequered flag appeared there had only been one Aston casualty; tough luck indeed for LM15 which had suffered a puncture on the final lap. Awards were presented to a delighted Teifion Salisbury & Ben Mellors for third in class in their Ulster. Richard Bradley picked up a well-deserved first in the same class in his father's Ulster. in the two litre class, Alan Middleton was congratulated on his hard-won second place.

Well done everyone for a great weekend.