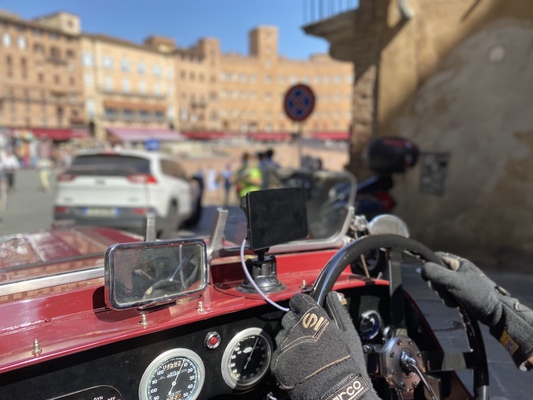 With the 'second wave' rise in Coronavirus cases Europe-wide the whole event looked in doubt. Hearing that other teams had pulled out, we scrutinized Government travel advice and devised a road route to avoid stopping in France. Our team were armed with border crossing declarations, track & trace forms, countless other paperwork and PPE, as well as the usual tools and spares needed for event support.

Unsurprisingly, the entry list was a depleted by about a third of the usual number. We supported two pre-war Aston Martins, one of which was LM 2 and was driven over (not towed) from the UK the week previously and was to be driven home again afterwards giving a total distance of around 3,000 miles - we love that level of commitment! Both this, and the Speed Model driven by Blakemore & Middleton, finished the event - and with wide smiles on their faces. As usual, the scenery was stunning, the weather perfect, and the twisty mountain roads deeply satisfying.

The support team comprised of: Ben. He had his work cut out with solo route navigation and early doors/night time vehicle servicing, plus a complete clutch change and the usual little mechanical niggles. Wherever we are, the support team are certainly the unsung heroes.

Both Astons came first and second in the final ranking for British teams (out of two!) The Speed Model finished 17th in their group and 29th in the overall ranking for non-Italian entries. But what matters most of all is that it was hugely enjoyed by all.