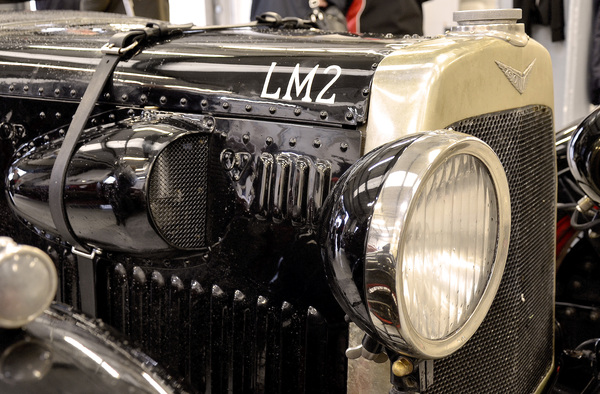 This could have been a somewhat muted affair, given the relentless rain and the kind of year 2020 has been. But no - we had an absolute ball! In our garage we had a noble collection of pre-war Astons. These included the now familiar sight of Speed Model 'Red Dragon' champing at the bit to taste some track action again; the Blakemore Speed Model fresh back from the Nuvolari Rally in Italy; the much-campaigned Ulster of Edward Bradley; the stunningly beautiful Monoposto which hadn't seen racing action for a little while; and the star of the show - ex-Works race car LM2 which had 2015 Le Mans LMP2 champion Richard Bradley at the wheel.

Having 'rested' for a decade or so, LM2 has resurfaced with a spectacular flourish. In September, having already been fitted with a new Ecurie Bertelli engine, it's owner drove it all the way down to Mantova in Italy for the Nuvolari Rally. He then completed the 1,000km route before the return drive to the UK. A week after this, having undergone some TLC in our workshops, it was ready for Richard to give it the time of its life on the Silverstone tarmac. Added to the excitement of watching Bradley father and son battle their way through the Bentleys, they were neck and neck with Richard having the edge. Sadly Edward's Ulster was forced to retire on lap 3 with loss of power and Richard was left to chase down the final Bentley. Further back down the soggy field, Red Dragon and the Monoposto had their own fight with Steve Skipworth's Monoposto finally taking the lead. The Blakemore Speed Model was held up by an Invicta and needed a safe passing opportunity as the rain continued to pour and the presence of oily rainbows on track became more prevalent.

In the end, the outright winner was a 4.5 Litre Bentley whose driver said he had to work very hard indeed to keep LM2 from gaining advantage in the corners. LM2 finished a close second followed by the Monoposto, Red Dragon, and the Blakemore Speed Model. Our support team were delighted to see Ecurie Bertelli cars finish 2nd, 3rd, 4th and 5th. This year the race format returned to the much fairer 'sealed handicap'. After this was applied the race results had Steve Skipworth awarded no less than three trophies: Horsfall winner, 3rd overall, and 3rd on handicap - well done to him!

There were several other pre-war Aston Martins out on track, having their own fight further down the field and ensuring that the Horsfall Trophy race was not dominated by other marques. A total of 9 Astons took part. A further 2 were anticipated but could not attend.