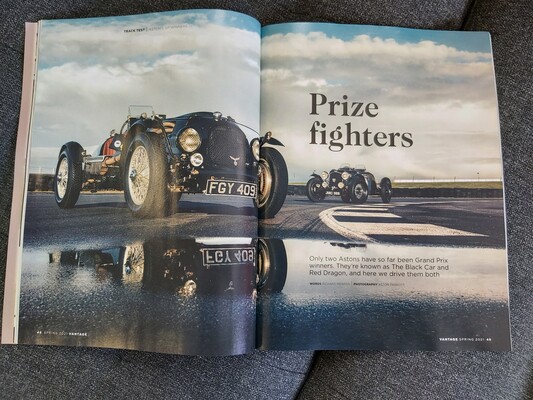 Nestled within pages of the latest issue of Vantage Magazine is an absolute gem - Dickie Meaden's first experience in not one, but two, pre-war Aston Martins. And not just any old pre-war Aston - not that any can be described as 'ordinary' - but these two are the only two to have won a Grand Prix. Ever. In the entire history of Aston Martin. Dickie is a lucky chap then, to meet such stars on his first outing!

The cars are affectionately known as The Black Car & Red Dragon. Both are Speed Models and have distinguished race histories in addition to their GP wins. So as not to spoil such a good read, I'll just leave it there. Get yourself a copy and settle into a comfy sofa.

Back copies are available here: