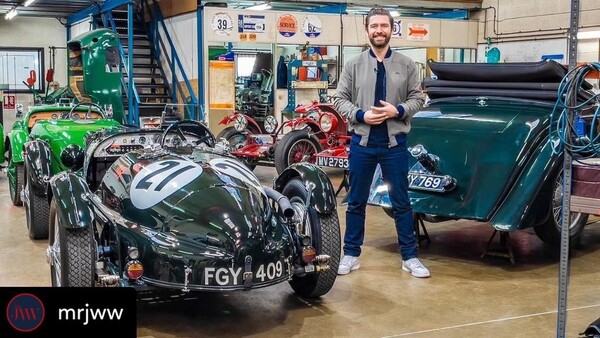 Automotive lifestyle personality and influencer James Walker, aka Mr JWW, may not be a familiar name but he has a substantial social media following. With over 600k on YouTube alone and another 348k on Instagram, petrol-heads all over the globe enjoy his vlogs covering beautiful and interesting cars and the interesting automotive adventures he goes on. Up to now his content has focused on modern era cars but now he's trying out something very different - the pre-war Aston Martin.

With a series of films planned, the first of these has just been released and much to the delight of his audience. James' visit to Ecurie Bertelli has, in his own words, blown his mind! Like many people he had presumed that Aston Martin's history began with the DB models. His visit to the workshops included a tour around the cars on site, a brief passenger ride to ruffle his hair and put a grin on his face, a look at our parts manufacturing and a history lesson!

The videos he makes will chart his journey into becoming familiar with these cars and the ultimate destination being him driving one at the 2021 Le Mans Classic.

His first video can be seen on our website in the videos section of our gallery, or search for him on YouTube and take a look. With more films to follow, keep a look out to see how he gets on learning to drive the masterful Speed Model.