Sun (& spectators!) at the Thruxton Historic 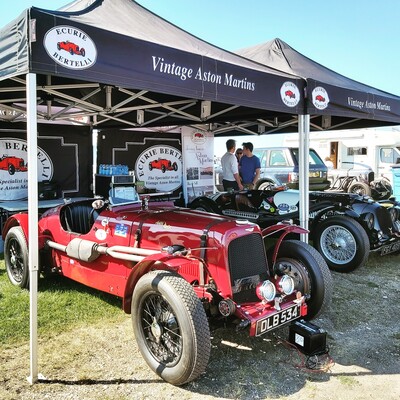 What a joy it was to go to an event with spectators again. There is something unnatural about closed-doors events and it was wonderfully refreshing to chat with all sorts of interesting folks as they wandered freely through the paddocks. The Thruxton Historic is a relatively new event having been birthed in 2018, but it offers spectators good views from either the grandstands or the grass banking. It was a less familiar circuit for our drivers who found the venue's claim to being the fasted UK race circuit to be utterly valid, due not least to the highly-grippy surface. This allowed several corners to be taken at over 100 MPH which means the engine is maintained at high revs for a much longer duration than usual as they then kept up full throttle into the proceeding straight. This gave rise to an uncommon situation: the need to ease off the throttle to keep from exceeding revs limits. This, combined with the heat from an absolutely scorching day, was tough on engines and of the grid of 19, there were an uncharacteristically high number of DNFs. One withdrew after qualifying and a further seven retired during the race - rather disappointing statistics.

The two Ecurie Bertelli supported Speed Models didn't miss a beat though, which is testament to the thorough preparation carried out by our experienced workshop team. Again, they worked tirelessly beforehand ensuring the cars were tested and set up properly. On the day itself they unloaded, set up our marquees and equipment, refuelled the vehicles and made sure they were ready for scrutineering. As pit crew they recorded lap times and called drivers in for the compulsory pit stop. Whilst the drivers received their trophies they packed down and loaded up before taking the Astons back home to the workshop. Our race team only exists because of their dedication and hard work.

Five Aston-Martins raced in total - a pretty good turnout considering Covid-related travel restrictions kept some of the other familiar contenders away. Sadly, the Ulster of Edward Bradley retired due to issues caused by a broken valve spring. Congratulations to Alan Middleton in Red Dragon for his finish in 4th overall and 1st in class, and to Robert Blakemore in his Speed Model finishing 6th overall and 2nd in class.