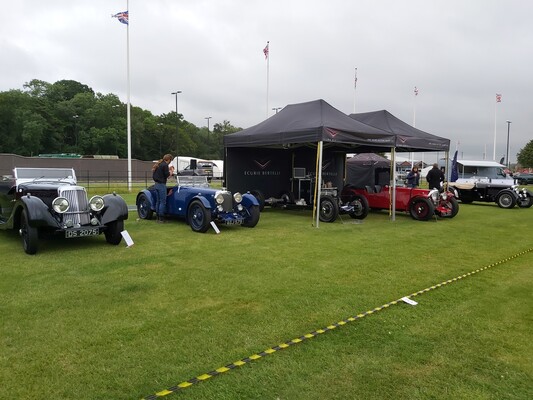 Of note in attendance were several cars of historical significance. For the first time in decades, sister Team Cars LM1 and LM2 were parked together, with LM3 just beyond. The only two Grand Prix winning Aston Martins came along too; Red Dragon and Jock Horsfall's Black Car. Also, the Side Valve 'Cloverleaf' came too - one of only two surviving Bamford & Martin Astons to have raced up the Aston Hill.

We also took along several of our sale cars which piqued a lot of interest, but the one which drew the biggest crowd of all was a long chassis International saloon which is partway through a mechanical restoration. As a 'rolling chassis' it has had all chassis work done including the road springs, shock absorbers, rebuilt differential and partly rebuilt brakes. The new engine was in place but not yet plumbed in. It's always fascinating to see what's under the skin and fantastic to be able to showcase the skilled work of our engineers.

Parked alongside A3 on the AMHT display was a new limited edition A3-Vantage by Aston Martin's 'Q' department. Looking smart in black with silver infill panels, Ecurie Bertelli were pleased to have had a part in this having polished the panels and fitted the black leather belt to each side - all in keeping with the styling of the original A3.

It was great to meet with many pre-war owners who had brought their cars along to the festival too, as well as meeting new folks who were interested in the pre-1940s cars. Even the weather behaved which made the return journey as much fun as the outward one and drew plenty of interest from fellow motorists.

Will there be another next year?