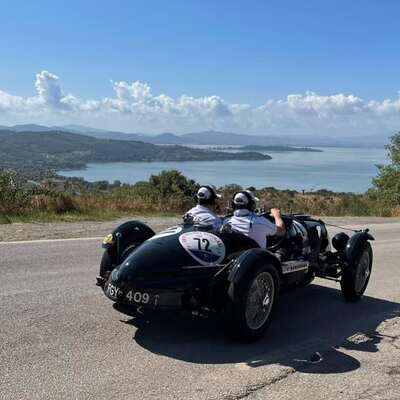 Whether this event would even go ahead with Covid-19 goalposts still mobile gave us some headaches at the planning stage but we kept the faith and what a rally it was! We mustered a team of 5 pre-war Aston Martins with crews from the US and Switzerland as well as the UK. This comprised two Speed Models, a 15/98, a long chassis Le Mans and an International Le Mans.

The route started from Mantova and, as always, was just stunning. Day one wound south through Bugatti and the circuit at Modena and then took in the beautiful scenery south of Bologna. The drivers later reached the the exquisite Raticosa pass and later completed a regularity section on the track at Mugello circuit. More breathtaking countryside and villages were consumed before the first day ended at the grand old coastal town of Rimini. Day two headed south through more breathtaking villages and passes down to Lake Trasimeno. Travelling around the south Lake shore before heading back up via San Marino to reach Rimini again for the second night. Day three gave a change of driving style with faster roads and a chance to really open up the throttle. More regularity sections were completed on the way before the event finale at Mantova.

All 5 of our Astons completed the 1,000km distance and the crews immensely enjoyed this fabulous rally. Our support team were on hand throughout and kept everything running sweetly with end-of-day servicing as well as sorting various minor technical niggles enroute and at refreshment stops. The staff work very hard and should be congratulated for their tireless efforts, as well as the team back in the UK whose vigilant prep work shone through as testament the reliability of the cars before they even turned a wheel on Italian soil.

The 12-strong "Team EB" enjoyed great social times at the mouth-watering food stops and with much good-humored banter. Pity the poor co-driver who accidentally topped his Aston up with diesel without realising and who wasn't allowed to forget it! All was well in the end although their passage was rather smoky for a while.

More of their adventures can be seen on our social media channels as well as as a collection of photos in the gallery section on our website. If you are interested in taking part in this rally we can help with your entry, vehicle transport, technical support and also with doing a regularity rally if you're a novice. We look forward to this one again in 2022!