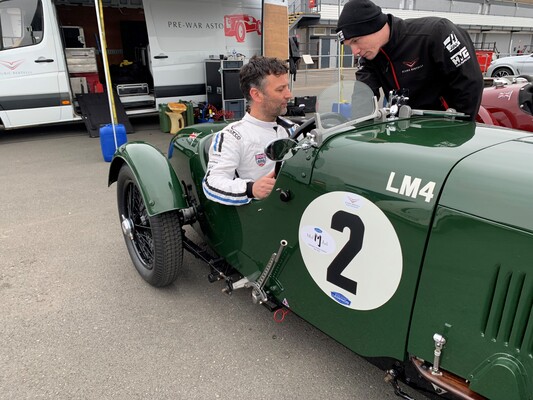 The recent Donington Historic Festival  a celebration of historic racing  was particularly notable for the pre-war Aston Martin enthusiasts as it marked the return to race action of one of the marques most significant early cars: LM 4.

LM 4 was built in 1930 as a Works Team Car created to take on the World at the prestigious Le Mans 24-hour race. Its fabulous racing history dates from its debut at Brooklands in 1930 where it came 4th overall in the Double Twelve, and an enjoyed a class win at the Irish GP of the same year. LM 4 is a significant piece of Aston Martins motorsport history. In recent years it took part in the inaugural Le Mans Classic in 2002 and again in 2004 and 2006. What an absolute delight to see it back in action at the Leicestershire circuit after a spell with us at pre-war specialists Ecurie Bertelli.

For such a significant occasion it was only fitting that one of the brands most successful well-known drivers of the modern era, Darren Turner, should be at the wheel to campaign the car.

While the racing was exhilarating, and it was a joy to see LM4 being driven in anger once more, the mischievous gods of motorsport couldnt help but intervene and a throttle linkage failure put paid to LM4 and Darrens hopes of a strong showing on the cars return to competitive action. Forgivably, the component that failed was original Works casting and had been working reliably for the previous 92 years  not a bad record when all things are considered. Im not sure modern components will be able to share this boast!

LM4 will return to the track in June for the VSCC race meet at Donington once again before the Snetterton Historic festival with Motor Racing Legends.