Please select the Photo Gallery you wish to view 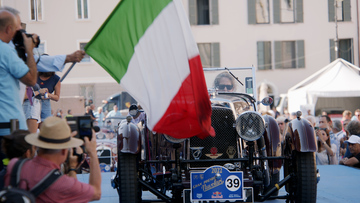 We supported 6 Aston-Martins this years including a post-war DB4. The pre-war team comprised two Internationals with USA crews, a 15/98 with a Swiss crew, a Le Mans and Speed Model with UK crews. 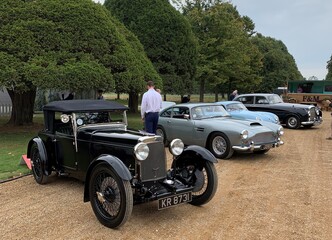 This year, we showcased a very special Aston-Martin and a truly unique one at that. This 1930 International is the only Aston-Martin ever to have been bodied by James Young Coachbuilders. As such, the body is a different shape to the norm and is covered in period-correct Rexine fabric. This car has only been dismantled once and has been carefully restored by Ecurie Bertelli and remains correct to the finest details. It created a lot of interest at Hampton Court this year. 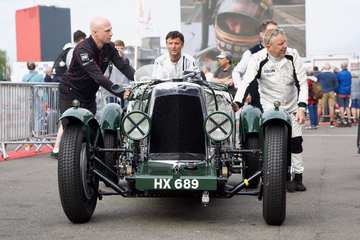 Ever-popular and as good as always, the Silverstone Classic was another cracker. Ecurie Bertelli prepped and ran 4 Aston Martins.

All photos: Steve Wells (except where captioned otherwise) 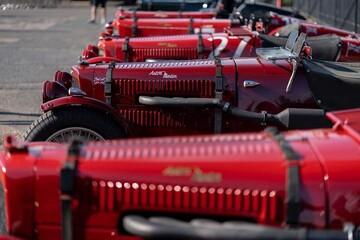 After the success of the AMHT's Heritage Festival in 2021, this year's gathering at Brooklands proved to be as popular. This year focused on the pre-war cars with the Team Cars given the spotlight. Pre-war cars had the opportunity to try out the test hill. 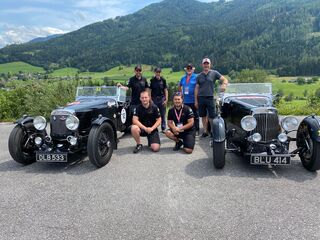 850km of non-stop picture-postcard scenery with four pre-war Aston Martins - really, our customers and support crew are having a fantastic year! Enjoy these photos which sadly just don't do the views justice. Best of all, why not come along on the next one and experience it all first hand? 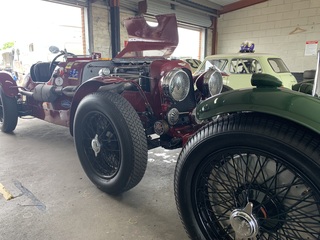 This year the Horsfall Trophy race took place as part of the new Snetterton Historic, organized by Motor Racing Legends. As the race was traditionally an Aston Martin-only race (but sadly no longer) it was good to see that 5 of the 27 entries were pre-war Aston-Martins. There were no less than 3 Speed Models, an Ulster and Team Car LM4. LM4 was driven by owner Jonathan Lupton and co-driven by AML pro driver Darren Turner. 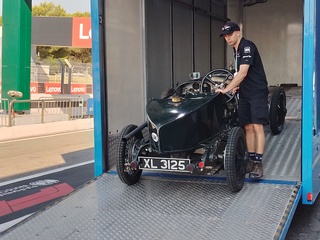 When Aston Martin wanted to celebrate their centenary of Grand Prix racing, we got suitably stuck in. Working with owner Rob Murray we got his 100 year-old still-racing GP car, Green Pea, to Paul Ricard for the 2022 French Grand Prix.

Postponed for four years and much anticipated, Ecurie Bertelli prepped and supported four Aston Martins for the pre-war grid. 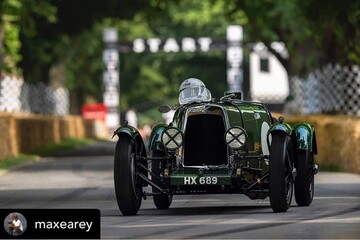 The Side Valve 'Green Pea' and Works racer LM4 were privileged to be able to take part in the Festival this year. Ecurie Bertelli ran LM4 along with the owner who was able to enjoy their first drive at Goodwood.

Photo credit: Max Earey for first one, Ecurie Bertelli for the remainder 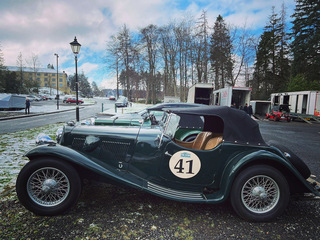 110 vintage machines took to the beautiful Scottish roads for the12th Flying Scotsman Rally. In the mix were four pre-war Aston Martins: a Speed Model, a 15/98, a Le Mans, and a Mk II. It would be foolish to expect the weather to be warm, but the camaraderie was very much so. We looked after the preparation of three cars and the crews had a great time, as always. 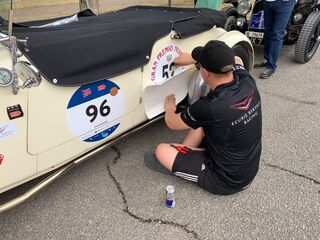 Another cracking rally with our team of 5 pre-war Aston Martins completing the event. Why not join us for 2022? 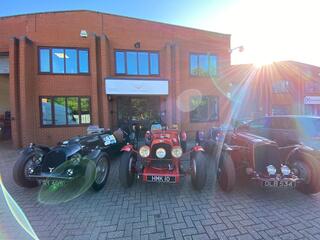 We had 4 Aston Martins in our care this year. We had no less than four Speed Models out on track including the Brooklands 'Monoposto' and Red Dragon.

The weather was a mixed bag of dry qualifying and wet racing. 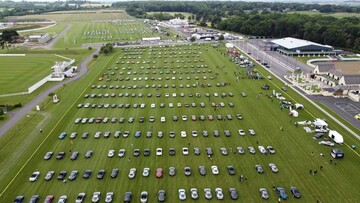 The biggest ever gathering of Aston Martins, held at the Dallas Burston Polo Club near Royal Leamington Spa. 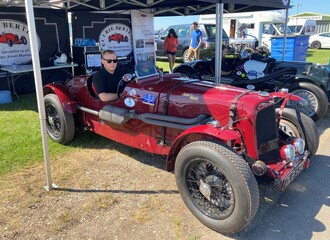 At last - a track event with spectators! Thruxton will be remembered for its blistering sunshine and one very fast track. 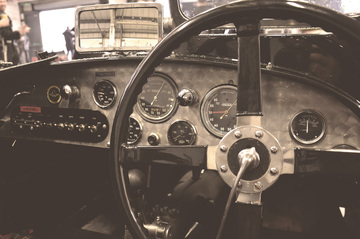 What with Covid-19, biblical rain and a closed-doors race this could have been a rather muted affair. But no indeed - we had a good turnout and some fantastic race action! Many photos are thanks to Adam Gompertz 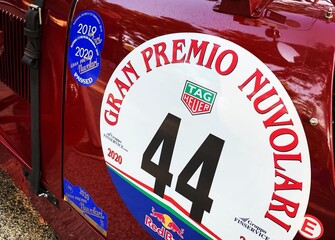 A jewel in the rather disappointing crown which was 2020, with Covid restrictions casting doubt on the whole event and making travel logistically challenging. Enjoy our only overseas event for the whole year where we supported ex-Works race car LM2 and the Speed Model of Robert Blakemore. 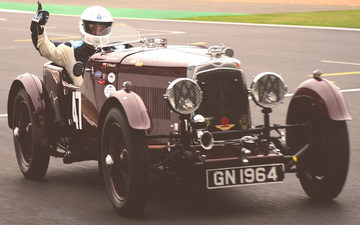 Many Astons in action this year! Our drivers took home a 1st, 2nd & 3rd in class - great results, and smiles all round. 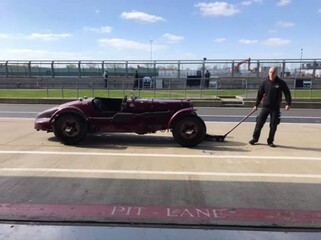 We had a fleet of 5 Aston Martins out on track for testing on a chilly but sunny April day. Two Ulsters, two Speed Models and an International had a shake down for the start of the season on the full Grand Prix circuit 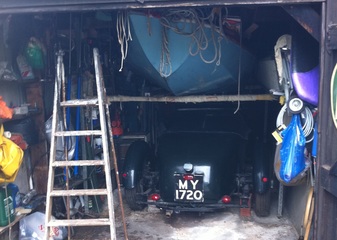 Discovered languishing under a sailing dinghy in a wooden shed in 2013, S25 had not been used for the best part of 50 years. Built in 1929, this is the story of her restoration. 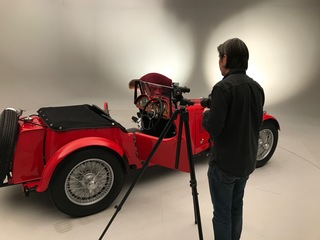 Ecurie Bertelli was privileged to be invited to the famous LAT studios in Feltham. We took a stunning 1933 Le Mans along - many thanks to Auto Classics for the opportunity.

Some stills from the 2017 Horsfall race. See our video gallery for some footage of the action. 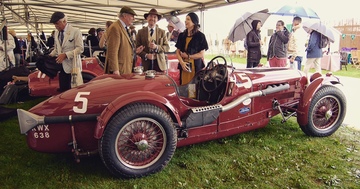 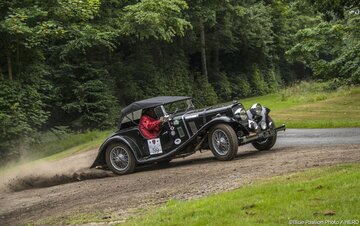 We supported six Astons on this fantastic event, including one of our Arrive & Drive cars. Participants enjoyed both regularity sections and driving tests in some fantastic settings 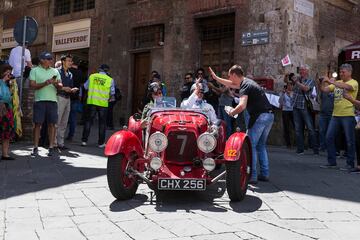 With an amazing 12 pre-war Astons taking part in this year's Mille Miglia, here are plenty of shots of them in action. All 12 finished - congratulations to all!

Highlights from what us oldies used to call "The Spring Start" 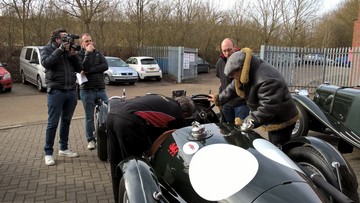 In February 2017 we had a visit from AC/DC singer Brian Johnson and his film crew. His series for petrol-heads, Cars That Rock is very popular as this lovable Geordie indulges his irrepressible passion for cars. 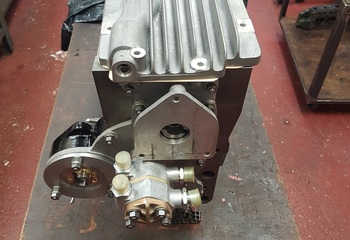 Around the EB workshop

Shots of the handiwork of our engineers and craftsmen

It was a glorious day with stunning cars and a wonderful crowd of people. 67 pre-war Astons were on our site and over 170 owners and enthusiasts. They'd come from France, Belgium, Germany, Austria, Netherlands and Poland, and from Fife in Scotland. The car park at Ecurie Bertelli HQ has never looked so stunning! Our guests browsed the cars, shared stories with owners, and toured our workshops including the dyno, and met our team. After lunch we took to the road on a scenic rally to Claydon House. A surprise road closure added an initiative element to the route!

Thank you to all who came along. Thank you also to Emma Karwacki and Kary Jiggle for the photos. 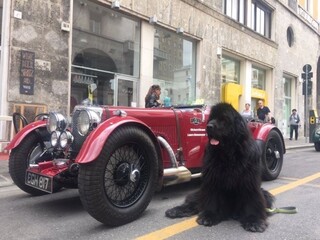 Our team went straight to Brescia after supporting the Monaco Historic Grand Prix. At the Mille Miglia we provided technical assistance to four of our customers as they covered the 1,000 miles in three days, to Rome and back along the other coastline. Here are some shots of our team and the Astons taking part. 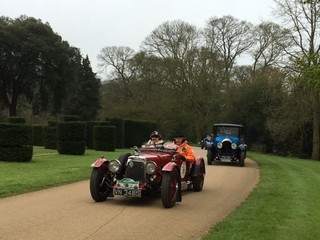 Eight pre-war Aston Martins took part in the 2016 ERA Flying Scotsman Rally. 110 vintage cars took part, covering hundreds of miles in all weathers and over three days; this was a truly memorable event. Congratulations to all who took part and made the finishing line at Gleneagles. 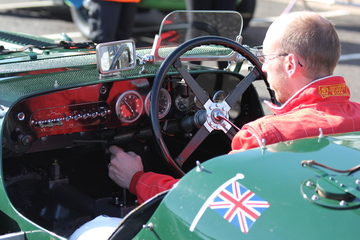 Robert Blakemore was privileged to be able to race the famous Ulster CMC 614 at the Donnington Historic festival - 80 years after the car's first appearance there. 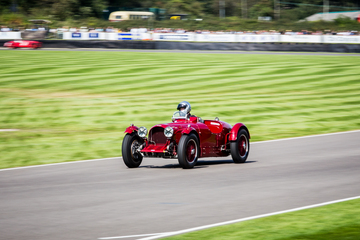 Ecurie Bertelli were present at the unique Goodwood Revival. Our customers had a fantastic time racing their cars and enjoying the atmosphere 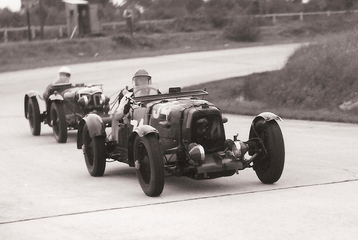 A selection of photographs of prewar Aston Martins through the years. Some are period photos of events, others are more recent, others are just of beautiful or rarer models.

With special thanks to images shot and provided by Aston Parrott and Matt Howell.