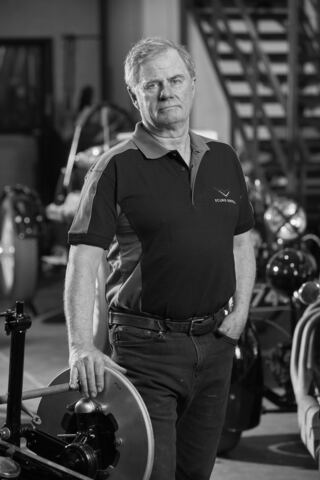 Andys passion for Astons stretches over 40 years. Having been with the firm since 1977, he has owned and managed it since 1992. His knowledge and technical expertise are unsurpassed for these cars - there is no problem he cant overcome! He is also the technical consultant for pre-war cars of the Aston Martin Owners Club. Andy has moved into semi-retirement but enjoys nothing more than working on his own Aston projects in the workshop - he just can't stay away. 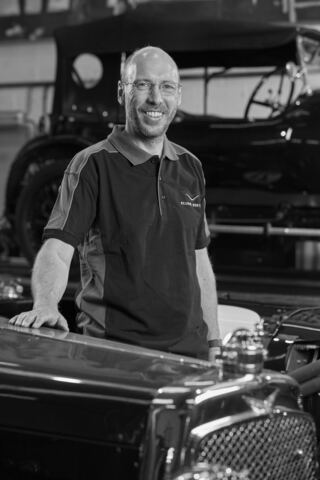 Since the age of seven, Robert has been involved with these incredible cars. He came into the business alongside Andy in 2014 and has continued to propel Ecurie Bertelli to the forefront as the prime marque specialist. As one of the next generations of pre-war Aston Martin enthusiasts, he is dedicated to preserving the heritage of these unique vehicles. Free time sees Robert enjoy historic racing, running, and time with his family. 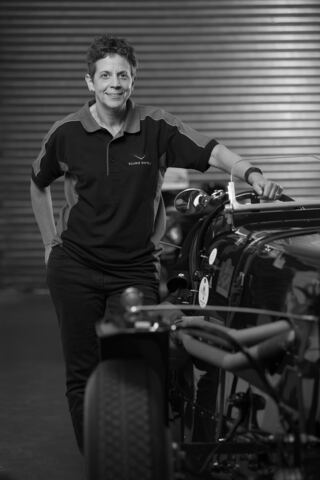 Previously an airline pilot along with husband Robert, Ali has brought a new flavour to the company. Having been involved with the new branding, showroom decor and expanded the company's digital presence, she is keen to keep Ecurie Bertelli firmly rooted in its rich history whilst taking on a modern feel. Ali is responsible for day-to-day finances, advertising and administration. She enjoys playing bass guitar and running in her spare time. 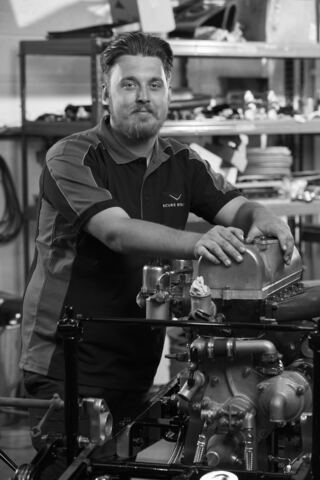 Simon joined Ecurie Bertelli as an apprentice, with an unbridled passion for vintage cars and bikes. He has high attention to detail and great engineering skills, and now oversees the technical aspects of the workshop. He is also a natural instructor and supervises our next generation of apprentices. He owns a Classic Mini which he enjoys in his spare time, and is also a keen dinghy sailor and model aircraft flyer. 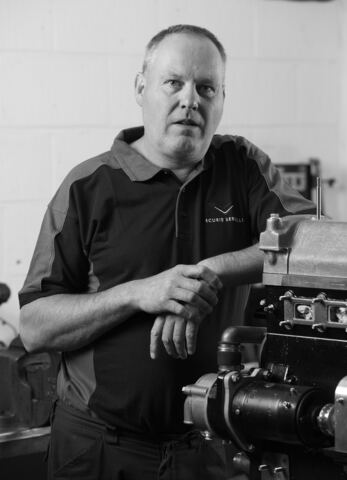 There is no better pre-war Aston engine than one built by our Simon. He has a fantastic eye for attention to detail and knows these engines inside and out. In his spare time he enjoys building and flying model aircraft, many of which he builds himself. He also runs a vintage car enthusiasts club and has recently acquired a vintage motorcycle which he takes on tours with his mates. 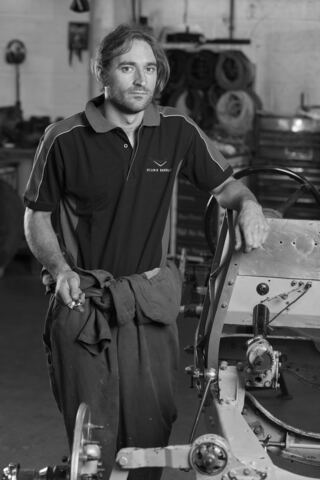 Will is a true craftsman and can make just about anything. He has demonstrated time and again how his skills and eye for detail can produce bespoke parts to precise specifications. He is a keen guitarist in his spare time and writes his own material, playing at local gigs with his band. He is also an engineer for a local drag racing team which meets at Santa Pod to tear up the strip. 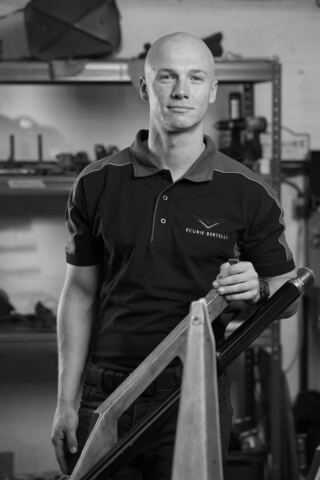 Although Ben has a background in retail management, he found his love for vintage cars an allure he couldn't ignore. He is passionate about maintaining Aston Martin's great heritage and is a well-established part of the workshop team. He is a regular member of our events support team and enjoys keeping the Astons out on tours and track alike. He is a new and proud Dad and when he gets some time to himself he likes to attend race meetings and track days. 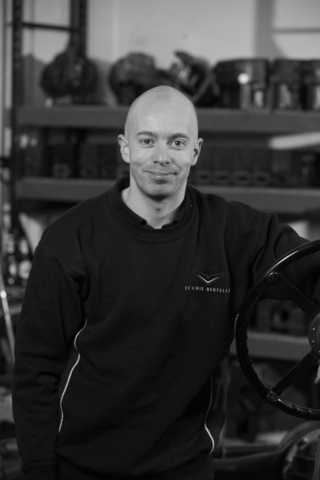 After completing his apprenticeship at Cosworth racing, Richard honed his skills working for the Government as a prototype engineer fabricating fine-tolerance one-off components and projects. Richard lives and breathes pre-war vehicles and spends his spare time restoring, maintaining and driving his array of early vehicles. When not tinkering in his shed Richard spends his weekends touring around the UK in his trusty Model T Ford.

Graham joins us with over 40 years experience in the motorsport arena which includes work on a broad scope of historic, formula and specialist racing cars. As such, he brings invaluable skills and experience to the team. In his spare time he enjoys watching motor racing, and particularly oval racing as he used to don his own helmet in this small track/large grid action-packed format. Graham also enjoys his classic American truck which he keeps as a running restoration project. 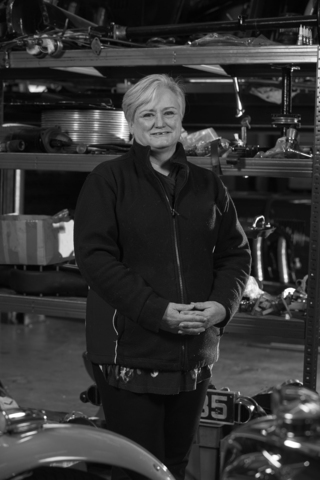 Beth is an experienced PA and Administrator. She joined us as a result of company growth and uses her many skills in updating company processes and assists Robert in his broad spectrum of daily tasks. In her spare time Beth is an active advocate for animal charities and the changing of Animal Welfare Legislation and enjoys spending time with her dog. 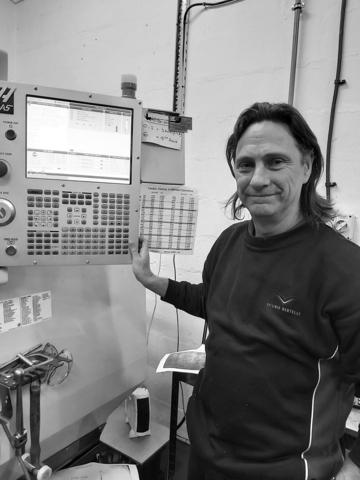 Steve is a very experienced machinist and joins us to run the in-house parts production on our CNC equipment. Since 1999 he has been making precision components for the motor racing industry, including Red Bull F1. Having started out as an apprentice tool & cutter grinder he later studied in Motor Vehicle Engineering. Steve is a keen motorcyclist and enjoys restoring his Classic 1960 AJS, and is a keen photographer in his spare time. 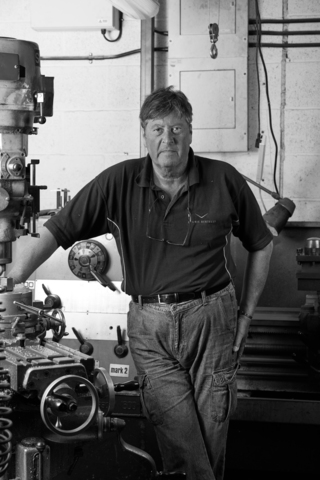 Adrian is an experienced manual machinist, who came to us from a Silverstone-based company producing high tolerance components for Formula One teams. He keeps our manual machine shop continually active, finishing and fabricating parts using original Works drawings as the basis for production. In his spare time, Adrian enjoys playing squash and cycling. 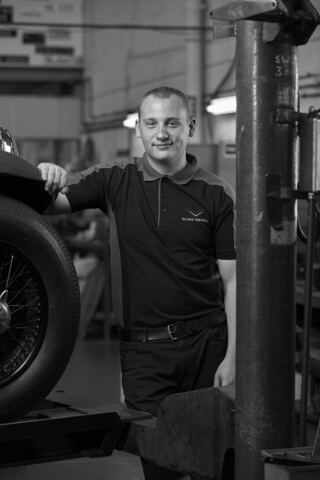 Callum joined the business during a ground-up restoration project which allowed him to see exactly how pre-war Aston Martins go together. Now midway through his apprenticeship he is also an advocate for Starter Motor, a charity which actively encourages young people to get involved with vintage vehicles. In his spare time, he enjoys going to car events and working on his Classic Mini.

Andrew studied politics and worked in the finance sector before starting his engineering apprenticeship to pursue a lifelong passion for classic cars. He becomes Ecurie Bertelli's newest apprentice and spends one week each month at the Heritage Skills Academy at Bicester doing a combination of classroom and hands on work. In his spare time he enjoys taking his Alfa Romeo GT Junior out for a spin and to events, and also enjoys playing guitar and watching F1. 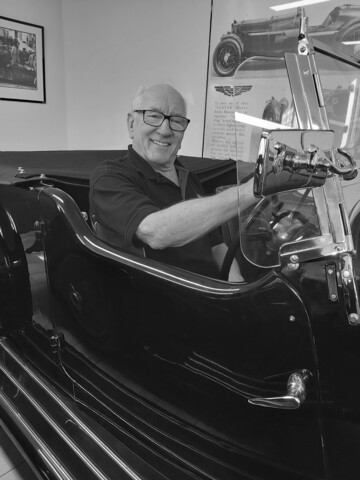 Andrew is a Worcestershire farmers son and started his working life in agricultural engineering. After training, he spent 20 years working in maintenance, sales and marketing of agricultural machinery. He moved on to warehouse management and logistics for a further 20 years. With masses of driving and trailer experience, and a good sense of humour, Andrew is an asset to our team. He and his wife are involved with community-centred groups including town councils and particularly the Royal British Legion where his fund-raising efforts have been hugely beneficial. 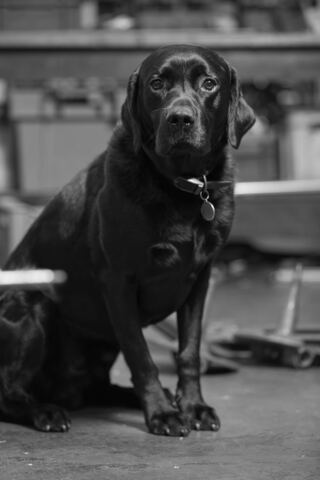 Full of boundless friendliness, Chief is now well-used to the sounds and smells of our Aston Martin haven. He enjoys walks in the countryside and chasing pigeons when off duty; be sure to shake a paw with him next time you visit!