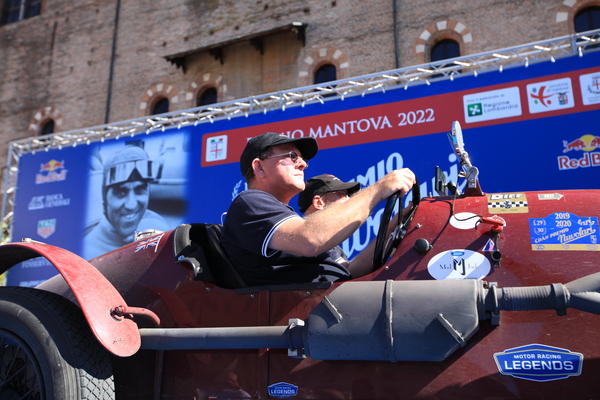 This year's Nuvolari was a busy one for Ecurie Bertelli, supporting five pre-war Aston-Martins and one DB4. As ever, our workshop team had thoroughly prepared the cars beforehand and so the best they could do was throw up only minor gremlins - but just enough to keep the support team from getting bored! Octane Magazine's Editor-in-Chief, James Elliott, shared a drive in Robert Blakemore's Speed Model for his first rally experience. Our driver teams comprised two from the USA, one from Switzerland, and three from the UK. The weather began in the accustomed sunny Italian style and the first day was dedicated to driver sign-on and vehicle scrutineering in Mantova.

The rally route on day one ran from Mantova to Rimini, taking in the circuits in Modena and Imola before heading up into some beautiful hillside scenery and then dropping down to the gorgeous coastal town of Rimini in the evening.

Day two starter cooler with driving on some fast flowing roads. Then it got interesting - the arrival of rain and wind brought jackets out and those blessed with vehicle hoods put them up. The meteorological mood changed from grumpy to a full-on angry rage with torrential rain and high winds which created some unexpected challenges as several trees now took up horizontal positions across roads and blocked the route in one location. The wet and cold later subsided and the highlight of the afternoon was a drive through the stunning San Marino before returning to Rimini for hot showers and a grand dinner.

Day three saw the welcome return of sun and warmth. For the entire day, the Blakemore/Elliott Speed Model was fueled only on sustainable fuel. This was provided by P1 Fuels, a company we have been working with for a few months now and the eagle-eyed may have spotted that it was this fuel used for GP racer 'Green Pea' when it was driven by Sebastian Vettel at the Paul Ricard circuit for the French Grand Prix weekend. The car ran faultlessly, required no re-tuning and in fact ran much more cleanly that it had on the standard fossil fuels. The final day's route began once more in the hills and transitioned to fast-flowing roads back to Mantova.

Did James Elliott enjoy his first pre-war Aston-Martin and rally experience, despite the wet and wind in a topless car? All will be revealed in his article due to feature in Octane Magazine in the near future!