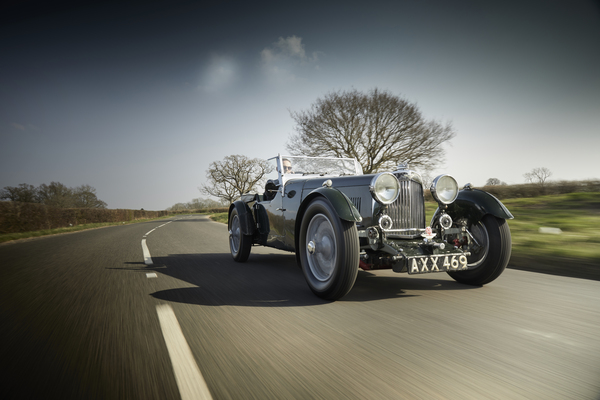 The awards season continued for us with a visit to the Royal Automobile Club in London as a finalist for their Restoration of the Year Award. This is an astonishing fourth finalist achievement for Ecurie Bertelli this year.

There were three candidates: a 1937 Rolls Royce Phantom III; a 1931 AEC Regent 486 bus; and our own 1934 Aston Martin Mk II barnfind, chassis 402, now proudly owned by Tom & Sue Wood and once owned by Sir Ralph Richardson. Later in its life, pending an engine rebuild, it ended up with a 50-year lay-up which actually turned out to its advantage as original parts remained untouched.

So began a new era for 402 under new ownership. A full sympathetic conservation was undertaken by Ecurie Bertelli to get it into good mechanical order with care to retain as many original parts as possible. Carefully stripped back to a bare chassis for the rebuild, everything was inspected and rebuilt. To preserve the paintwork, Ecurie Bertelli partnered with HMG paints to treat some areas of the cellulose paint which had split with 88 years of slow and continued drying. The hood had perished and the front seats had lost their leather upholstery but the original leather remained on the rear seat. With careful matching and aging, these were replaced but were an aesthetic match. Original instruments were refurbished and the wiring looms replaced with period-correct fabric covered cables. Even touched-in areas on new nuts and bolts were 'aged' to fit in with the rest of the car. 402 was now fully serviceable yet conserved.

Sadly, on the night 402 was pipped to the win by the bus. Nonetheless, it was an honour to be amongst the three finalists.